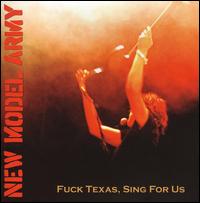 New Model Army – Fuck Texas, Sing for Us – Singles/Album Download
Format: MP3, WAV, FLAC. Full Album includes playlist and cover art. Singles come with cover art only.
Released: 2008 – Attack Attack
To Purchase: Click the “Buy” button for any song you’d like and it will be added to your cart. Once you have finished checking out, your downloads will be available from the My Account area.

Made in a similar way to “…& Nobody Else”, the band recorded a series of shows then chose the best versions of the songs
and spun them together to make a seamless concert.
It features old favouites and new classics, including the new version of Vagabonds with Marshall’s electric guitar version on the violin refrain

The album’s title is taken from an audience chant that preceded the second encore at The Hi-Ho Lounge in New Orleans in March 2008.
After one encore, Justin announced the end of the gig as he needed to save what was left of his voice for the show in Austin, TX the next night. However, having retired to the dressing room, all that could be heard in the venue was the crowd chanting “Fuck Texas, Sing For Us…Fuck Texas Sing For Us” over and over. That chant forms the intro to the album. We couldn’t not use it!