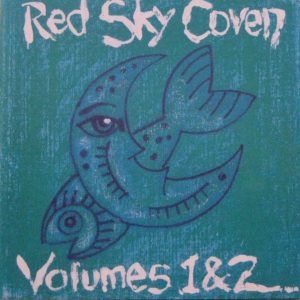 New Model Army – Red Sky Coven – Volume 1 & 2 – Singles/Album Download
Format: MP3, WAV, FLAC. Full Album includes playlist and cover art. Singles come with cover art only.
Released: 1998 – Attack Attack
To Purchase: Click the “Buy” button for any song you’d like and it will be added to your cart. Once you have finished checking out, your downloads will be available from the My Account area.

Red Sky Coven came into existence one rainy night in Bradford, Yorkshire, after Rev, Justin, Joolz and Brett went to a local folk club and were appalled by the lacklustre performances and apathy they witnessed there.
Vowing at first to change the face of the entire Western World, they settled instead for creating the now legendary cult travelling show that has energised and delighted thousands of fans all over mainland Europe and the UK, without any hype or media trumpeting.
Over the years, RSC has created a wholly different and tribalistic family attitude to the unplugged and spoken word performance; breathing love and comradeship into an intimate and passionate form.
Theirs is a show like no other; although now imitated, it remains the original and the best due to the genuine affection and friendship the performers feel for each other, a refusal to compromise and a dedication to giving 100% on stage every night come what may.

This double mp3 compilation features the best of the performances between 1992 and 1995.