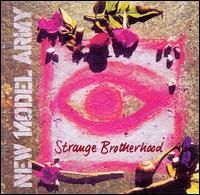 New Model Army – Strange Brotherhood – Singles/Album Download
Format: MP3, WAV, FLAC. Full Album includes playlist and cover art. Singles come with cover art only.
Released: 1997 – Attack Attack
To Purchase: Click the “Buy” button for any song you’d like and it will be added to your cart. Once you have finished checking out, your downloads will be available from the My Account area.

Released in 1997, the first studio album for five long years and the first for the band's own label. The tour in support of this record was the longest and hardest (the band played two sets every night) for years and the album re-established New Model Army as masters of their craft.